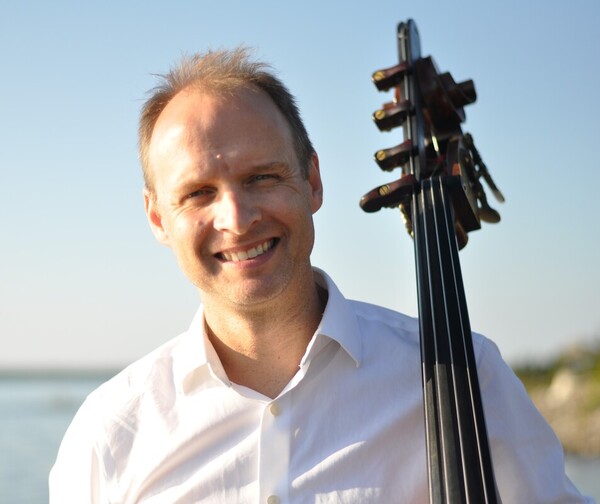 Described as “a superbly gifted musician” (Winnipeg Free Press), double bassist Meredith Johnson enjoys a varied and active career of performance and teaching. Since 2004, Meredith has held the position of Principal Bass with the Winnipeg Symphony Orchestra. In addition to his work with the WSO, Meredith has performed across the United States, Canada and Europe with numerous festival and professional orchestra. In 2012 he was invited to be an inaugural member of the prestigious All Star Orchestra, an ensemble which, since its inception, has garnered many educational and artistic accolades, including six Emmy Awards.
In addition to his full time orchestral schedule, Meredith is an enthusiastic and dedicated chamber musician. Praised for his playing of “resonant, lyrical beauty”, he has been part of many critically acclaimed chamber performances and has had the privilege of collaborating with some of the finest chamber musicians in Canada and the US, including: Martin Beaver, James Campbell, Jonathan Crow, David Harding, Paul Marleyn, Chauncey Patterson, Martin Roscoe, Nadja Salerno-Sonnenberg, James Sommerville, Axel Strauss and William Wolfram. Meredith was Principal Bassist of the Manitoba Chamber Orchestra from 2004-2013 and was part of numerous tours and recordings with that ensemble. He frequently appears with many of Manitoba’s other premier ensembles including Agassiz Chamber Music, Camerata Nova, GroundSwell, the Virtuosi Concert series and the Winnipeg Chamber Music Society. He has performed numerous recitals in Winnipeg working primarily with pianist Madeline Hildebrand. As a concerto soloist, he has performed with the Winnipeg Symphony Orchestra s well as the University of Manitoba Symphony Orchestra.

Teaching is an ever increasing focus of Meredith’s time and energy. In addition to a select private studio and his instruction at the University of Manitoba, Meredith maintains a professional association with Memorial University of Newfoundland and Labrador. Since 2001, he has been a member of the faculty of the Eastern Music Festival in Greensboro, NC. Increasing demand as a clinician has led to masterclasses at several universities across Canada and the United States. He is also the founder of Bassitoba; an intensive three day training and performing symposium that takes place annually in Winnipeg at the University of Manitoba.

Meredith has a wide variety of musical interests, He has been involved in numerous recording projects and performances in a variety of musical genres. He has recorded with the Nashvill based old time band, The Bashful Mountain Broadcastersas well as Winnipeg based Heavy Bell, on their debut album, By Grand Central Station. As guest curator for Winnipeg new music collective GroundSwell, he organized a concert, Les Citations, that included several Canadian premieres and was featured nationally on CBC radio’s The Signal. In 2017, he was a member of the consortium of bassists that commissioned Sueños, a multi-movement work for bass and piano by Argentine composer Andres Martin. Currently, he is spearheading a new commission project to get new chamber and solo works written for the double bass by eminent Canadian composers.

His double bass training began in Nashville, TN, serendipitously studying with Edgar Meyer while pursuing a degree in English Literature at Vanderbilt University. Upon graduation, he decided to continue his bass studies at Boston University with Boston Symphony Orchestra bassists Ed Barker and Todd Seeber, earing his Master’s Degree in Performance in 1966. From 1999-2002 Meredith held a Fellowship at the New World Symphony and upon the completion of his tenure there, he moved to Philadelphia to continue his studies with Philadelphia Orchestra Principal Bassist Hal Robinson.

His hobbies include tennis and cooking and he lives in Winnipeg with his wife, violinist Susan McCallum, their three children and the faithful family dog.