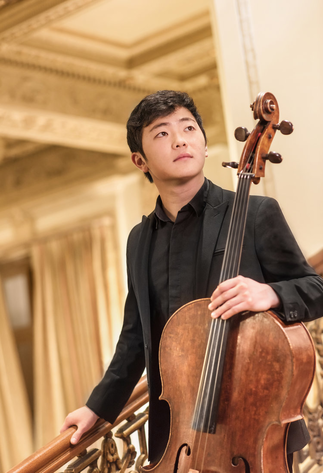 Praised for his “burnished tone, spellbinding technique, and probing musical mind” (Boston Classical Review), cellist Brannon Cho has emerged as an outstanding artist of his generation. He is the First Prize winner of the prestigious 6th International Paulo Cello Competition, and is also a prize winner of the Queen Elisabeth, Naumburg, and Cassadó International Cello Competitions.

Most recently, Brannon Cho is the recipient of the 2020 Janos Starker Foundation Award, the Landgraf von Hessen Prize from Kronberg Academy, the 2019 Ivan Galamian Award previously held by James Ehnes, and is a scholarship holder in the Anne-Sophie Mutter Foundation.

As a lover of chamber music, Brannon Cho has shared the stage with artists such as Anne-Sophie Mutter, Christian Tetzlaff, Gidon Kremer, and Joshua Bell. His recent festival appearances include Rheingau, Marlboro, Kronberg Academy, Music@Menlo, and Prussia Cove.

Born in New Jersey, Brannon Cho received his Bachelor’s degree from Northwestern University’s Bienen School of Music under Hans Jørgen Jensen. He was awarded the prestigious Artist Diploma from the New England Conservatory, where he studied with Laurence Lesser. Today, he is in the Professional Studies program at the Kronberg Academy, under the tutelage of Frans Helmerson. Brannon Cho is sponsored by Thomastik-Infeld, and performs on a rare cello made by Antonio Casini in 1668 in Modena, Italy.