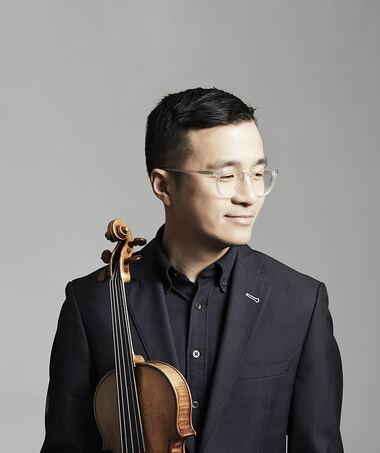 Andrew Wan was named concertmaster of the Orchestre symphonique de Montréal (OSM) in 2008.  As soloist, he has performed worldwide under conductors such as Maxim Vengerov, Rafael Payare, Vasily Petrenko, Bernard Labadie, Carlo Rizzi, Peter Oundjian, Michael Stern and James DePreist and has appeared in recitals with artists such as the Juilliard Quartet, Vadim Repin, Marc-André Hamelin, Daniil Trifonov, Menahem Pressler, Jörg Widmann, Emanuel Ax, James Ehnes, and Gil Shaham. His discography includes Grammy-nominated and Juno, Felix and Opus award-winning releases on the Onyx, Bridge, and Naxos labels with the Seattle Chamber Music Society, New York’s Metropolis Ensemble, and the New Orford String Quartet.  In the fall of 2015, he released a live recording of all three Saint-Saëns violin concerti with the OSM and Kent Nagano under the Analekta label to wide critical acclaim.  His recent live album of works for violin and orchestra by Bernstein, Moussa and Ginastera with Nagano and the OSM was nominated for a Juno award, as was his first volume of Beethoven’s Sonatas for Piano and Violin with Charles Richard-Hamelin.  Mr. Wan graduated from The Juilliard School with three degrees and is currently a member of the New Orford Quartet, Assistant Professor of Violin at the Schulich School of Music at McGill University, Artistic Director of the Prince Edward County Chamber Music Festival and for the 2017-18 season was Artistic Partner of the Edmonton Symphony Orchestra.  He has sat as guest concertmaster for the Pittsburgh, Houston, Indianapolis, National Arts Centre, Toronto and Vancouver Symphony orchestras.

Andrew Wan performs on a 1744 Michel'Angelo Bergonzi violin, and gratefully acknowledges its loan from the David Sela Collection.  He also enjoys the use of an 1860 Dominique Peccatte bow from Canimex.